Sandor Vegh and Antonio Janigro
In 1974, I went to Portugal to study in Antonio Janigro’s Master Classes in Cais-Cais. I went with a group of pianists from TCU whom Luiz Moura-Castro had arranged to participate in the Master Classes of Ravel’s student, Yvonne Lef?bure (there are videos of her master classes on youtube that are must see). Luiz was a great mentor to me, and because Janigro would not arrive for some time, he arranged for me to play in the great Hungarian violinist Sandor Vegh’s class. Both Vegh and Janigro taught at the Mozarteum in Salzburg.

Vegh had studied violin at Liszt Academy with Jenő Hubay and composition with Zoltan Kodaly, and was one of the greatest chamber musicians of the twentieth century (and a favorite of Casals). I was fortunate to play twice in his classes before Janigro arrived, and it was an incredible experience. Drawing on his deep experience, teaching cello repertoire that he had never studied was no problem, and to witness how he could take apart a piece and shape it with such eloquence was a real life lesson. As vivid to me now as it was 44 years ago. 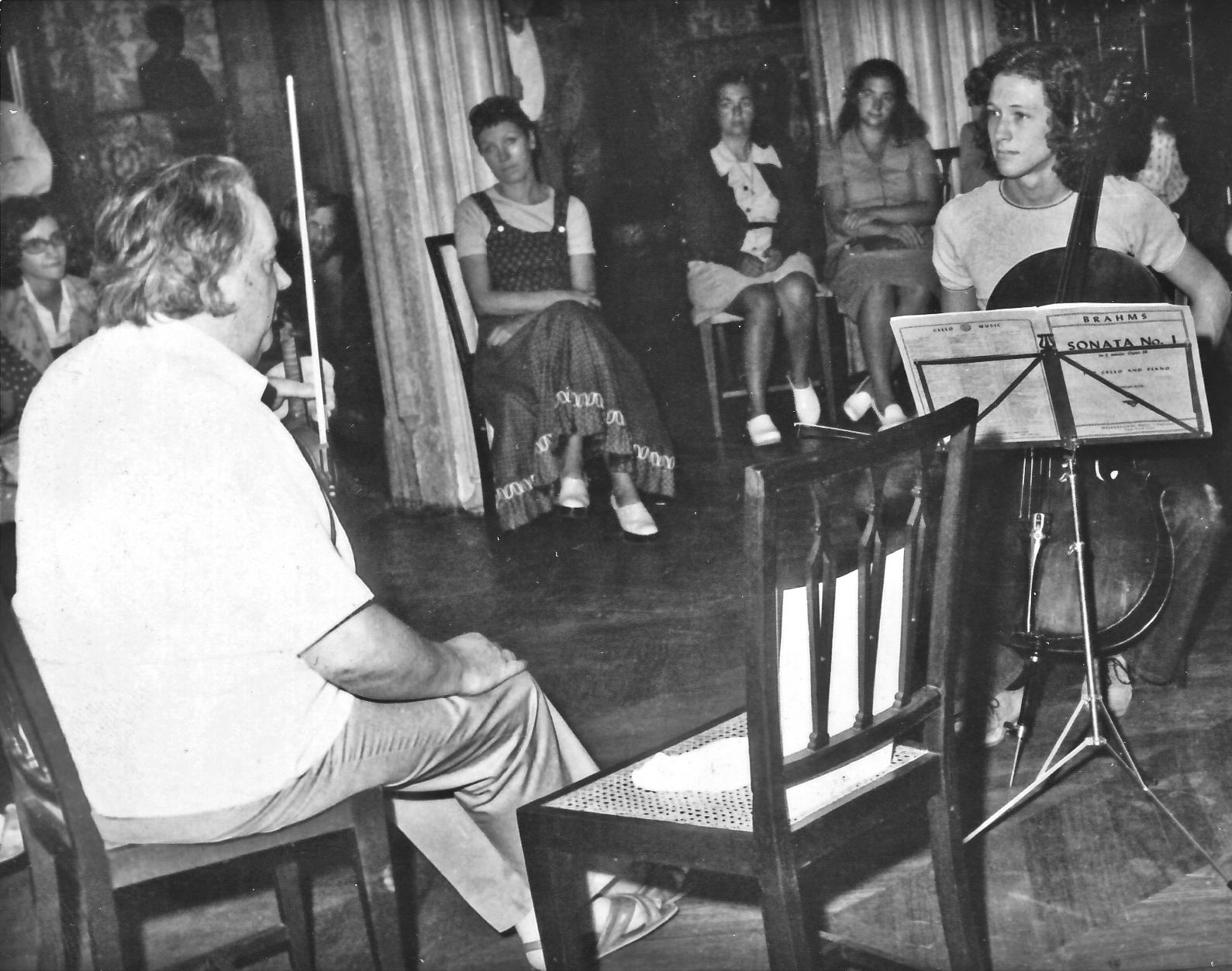 Antonio Janigro trained in Paris, but his playing was not in the “French” tradition, whatever that might mean, (though his knowledge of harmony, counterpoint and composition were very much products of that particular time in Paris, ie Nadia Boulanger). Alexanian was a Casals protege who taught all of Casals? students in thiat era, and he was a big man with huge hands (as one might well assume from the fingerings in his editions: lots of extensions). Janigro had a very focussed sound, very projected, but flexible.
The first time that I played for him, I played the Hindemith Solo Sonata, and then he took the occasion to summarize his technical approach to the instrument in an incredibly succinct and detailed manner, yet all driven by the music that I was playing. In just over an hour, he managed to address every aspect of cello playing, and much more, demonstrating at the cello and the piano what he was concerned with musically. His approach was not at all unlike what I understand from my Rose-trained colleagues (and the videos of him teaching) presented. Fundamentally about balance and weight, bow control, and using all of our tonal resources to shape a phrase. Janigro was so detailed (even regarding his approach to solving fingering problems), that everyone present got a lifetime of instruction in a couple of hours.
Janigro plays Couperin

I was invited to join him at the Mozarteum the following year, but family issues interfered. I only found out years later that Janigro was a fellow student and long time sonata partner with/of Dinu Lipatti who was and is one of my favorite pianists.

From the Lipatti Society:
Dinu Lipatti?s Repertoire ? Chamber Music
It is a little known fact that Dinu Lipatti was a skilled and enthusiastic chamber music performer. In his teens at the Ecole Normale de Musique in Paris, he had a trio with his fellow students Ginette Neveu and Antonio Janigro. He would tour Switzerland in 1947 with Janigro but it doesn?t seem as though he played with Neveu again, a real loss for posterity, especially since both of them were EMI recording artists. While he recorded his godfather Georges Enescu?s second and third Violin Sonatas with the composer performing, he didn?t officially record any chamber music from the mainstream repertoire. However, he did record six works with Antonio Janigro as a test for Walter Legge (a renowned record producer) in May 1947, but these were never released in his lifetime and only a few shorter works were found and issued in 1994.

Lipatti and Janigro in Paris

The first time I met Jascha was at my first performance with the Met Orchestra in the early 80s, and it was a funny experience. He was a great storyteller, and a very funny man who kept a bottle of vodka in his locker which was replaced pretty much every day as far as I could tell. It was the first intermission of Forza del Destino, and I encountered him on my way into the men’s locker room to freshen up. He pulled me aside because he wanted to tell me some stories about Janigro (he’d heard that I’d worked with him). Jascha had been principal of Mostly Mozart years before (in the days when most members of the Met had to have outside work because it didn’t pay enough to make it through the year). Janigro was an old friend of his and had been engaged to conduct one week of the season. After the last concert on Saturday night, they went back to Jascha’s place to eat dinner, drink and talk. The next thing he remembered was Tuesday morning… It was a different era.