One of the most widely misunderstood things among string players is the measure of strings known as “tension.” People have a strong tendency to project its meaning as “tense” and other such misapplied concepts. We extrapolate from such misunderstandings things which hinder a true understanding of cause and effect regarding our instruments and their response to different technologies.

We also have an inherited tendency towards terms which in themselves are vague and misleading as we struggle to put into words what we experience as we assess things like the strings we play upon. As we are not taught a common language to address many things about our common experience as string players, it is important for us to establish a clear and science-based set of terms in order for us to have a coherent discussion of particular elements of our field. It is rare, given the competitive nature of commercial enterprises like string manufacturing (where there is a natural competitive desire for a certain degree of secrecy), to find clear statements of fact by which we can understand exactly what it is that we experience as players.

A fairly new company in England, Rostanvo, has broken somewhat with their fellow string manufacturers in publishing clearly expressed and science-based explanations of the nature of strings and their performance. As the last few years has produced some real breakthrough innovations in string manufacturing and performance, this is an exciting and useful contribution to us all.

I quote below some information from Rostanvo Strings’ website, an explanation of string tension and other factors that affect a string’s response and character that can be accessed directly here:
rostanvo.com/resource/string-tension-explained/

where gut strings come from:

String reviews online
As the string demonstrations I had seen online were quite poor (in my opinion), I couldn’t take too much from them. That was my motivation to develop something that was not some vague, meaningless description/review, or so poorly produced as to be useless. I mean, what is bright, or dark, or rich, mean? Such terms are too subjective, vague, and individual to have any real utility.

In an effort to address this, I settled on particular repertoire that would show the full range of each string, as well as repertoire that shows how the entire set sounds together, playing them as consistently as possible regarding tempo and dynamics, and recording them with the most consistent possible placement of microphones and volume settings, with no sound processing whatsoever. Eventually I will post these in a variety of formats, so that one can compare all of the strings individually (A strings, D strings, G strings, and C strings), as well as as full sets. It is very time consuming, so these will be released as I can get to them. Here are some early examples:

Rostanvo’s excellent research is very interesting to me, and it is congruent with my own observations from the string demonstration project that I have undertaken. One thing I might mention here is that there is almost no difference in the gauge of a metal string when it is in its packaging and when it is on an instrument and tuned to pitch. I have not explored this phenomenon as relates to synthetic or gut core strings, however. Here is a chart I made that correlates string tensions and gauges from the strings I have worked on thus far: 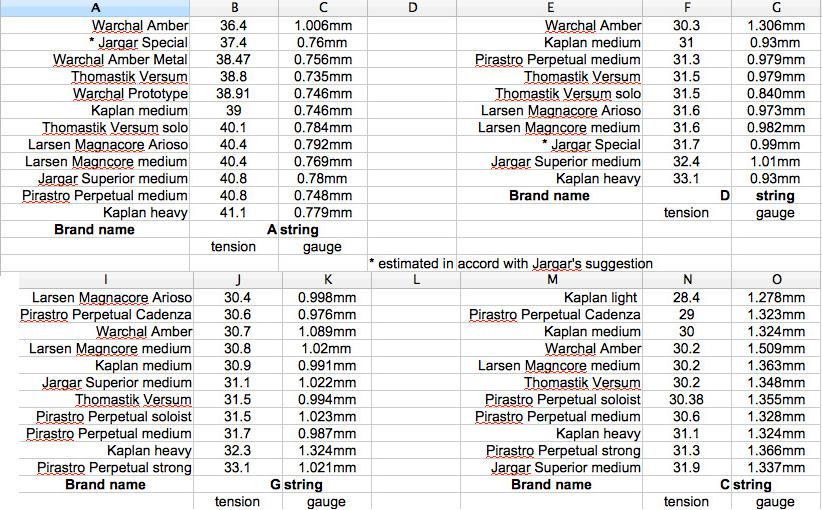 Pirastro Perpetual and Ariosos (Arioso is the lower tension version of the Perpetual C and G strings)
www.tapatalk.com/groups/cellofun/new-pirastro-string-t19645.html

A comparison of many strings

Two interesting offers from manufacturers
Warchal has a offer on the first purchase of their strings bought direct from them that is much cheaper than anything else on the market, so if one wishes to explore lower tension synthetic core strings, it is worth consideration.
Rostanvo offers a refund on their strings purchased from them if you do not like them.
Here is a discussion of some lower tension (mostly gut) strings.
www.tapatalk.com/groups/cellofun/non-tungsten-world-t19970.html#.WEg1vqIrKb8

When to change strings
There is no hard and fast rule as to when to change strings. I generally play on strings until things start to get weird, or are hard to tune (the overtones get funky making it difficult to hear), they don’t respond as they usually do (but this requires that you eliminate other issues like a big weather change, open seams, bridge height change, etc), or that they get balky or squeaky. Lots of the modern high end strings will last a long time ( I’ve had Evah Pirazzis on for 2 years+ and Versums on for over a year that still sounded good). Others, like Larsens and Magnacore are reported not to last so long, though I personally have no experience of this.